• Zara lingerie collection puts a lot more attention on nightgowns as compared to its competitors.

• The number one retailer in the world proved once again that timing is essential. Indeed, Zara launched its first lingerie collection when nobody focused on this segment, standing out from its competitors.

• More premium fabrics at a lower price than H&M, Zara has positioned its new collection in the lingerie segment at an affordable price.

In 2018, the value of the lingerie industry was around $30bn. Since March, the fashion industry has been facing the current crisis, and the lingerie category is among the top seller categories and top new arrivals. Combined with loungewear and comfortable clothes, retailers have quickly understood the importance of the underwear category.

However, until October 2020, Zara did not offer any lingerie nor underwear in its assortment. Previously reserved to Oysho, Inditex has decided to bet on its number one brand. Today,  Zara is joining the lingerie game. But what does it mean for the already established players?

An Assortment mix different than other players

Historically, the lingerie segment englobes briefs and bras. Nowadays, nightwear and socks are also part of lingerie. In our analysis, we have separated nightwear from underwear. The former category includes pajamas and all sorts of nightgowns. While the latter includes bras, briefs, and socks. 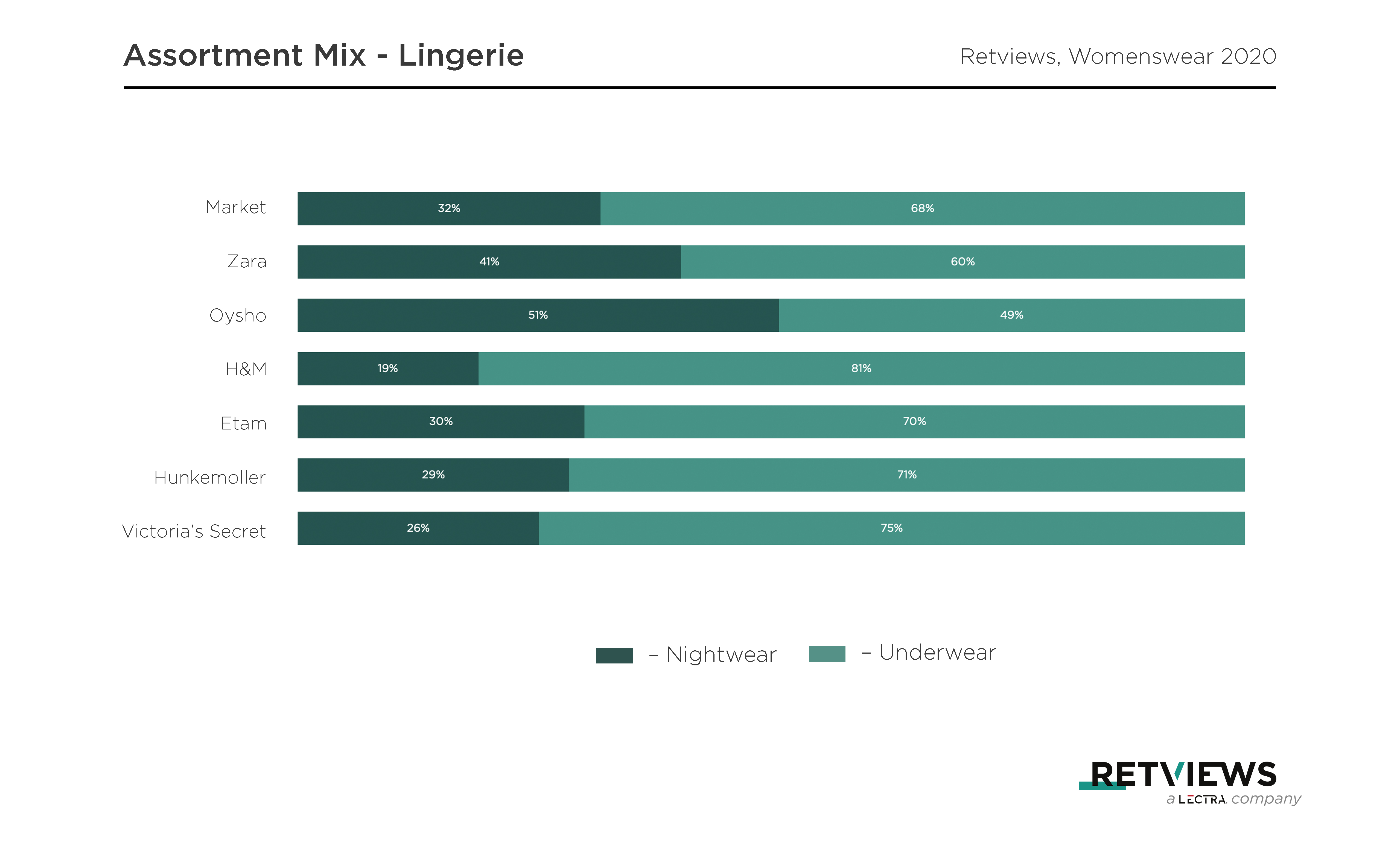 According to Retviews data, we see that the lingerie industry mainly consists of underwear (bras and brief). Zara’s strategy stands out in this assortment mix as, like Oysho, it has a higher share of nightwear than the market average. In comparison, we see that its direct competitor, H&M, primarily only offers underwear.

The ‘female gaze’ is the name Zara gives to its lingerie assortment. As the name suggests, it is feminine and discrete. The assortment reflects the idea of Zara’s lingerie.

Bodies, briefs, and pajamas (top and bottom) hold the highest share of the assortments. In this context of lockdown, Zara’s strategy proved to be versatile. The collection focuses on bodies that could be worn as tops with a pair of trousers to go out or simply at-home to feel sexy and comfortable. 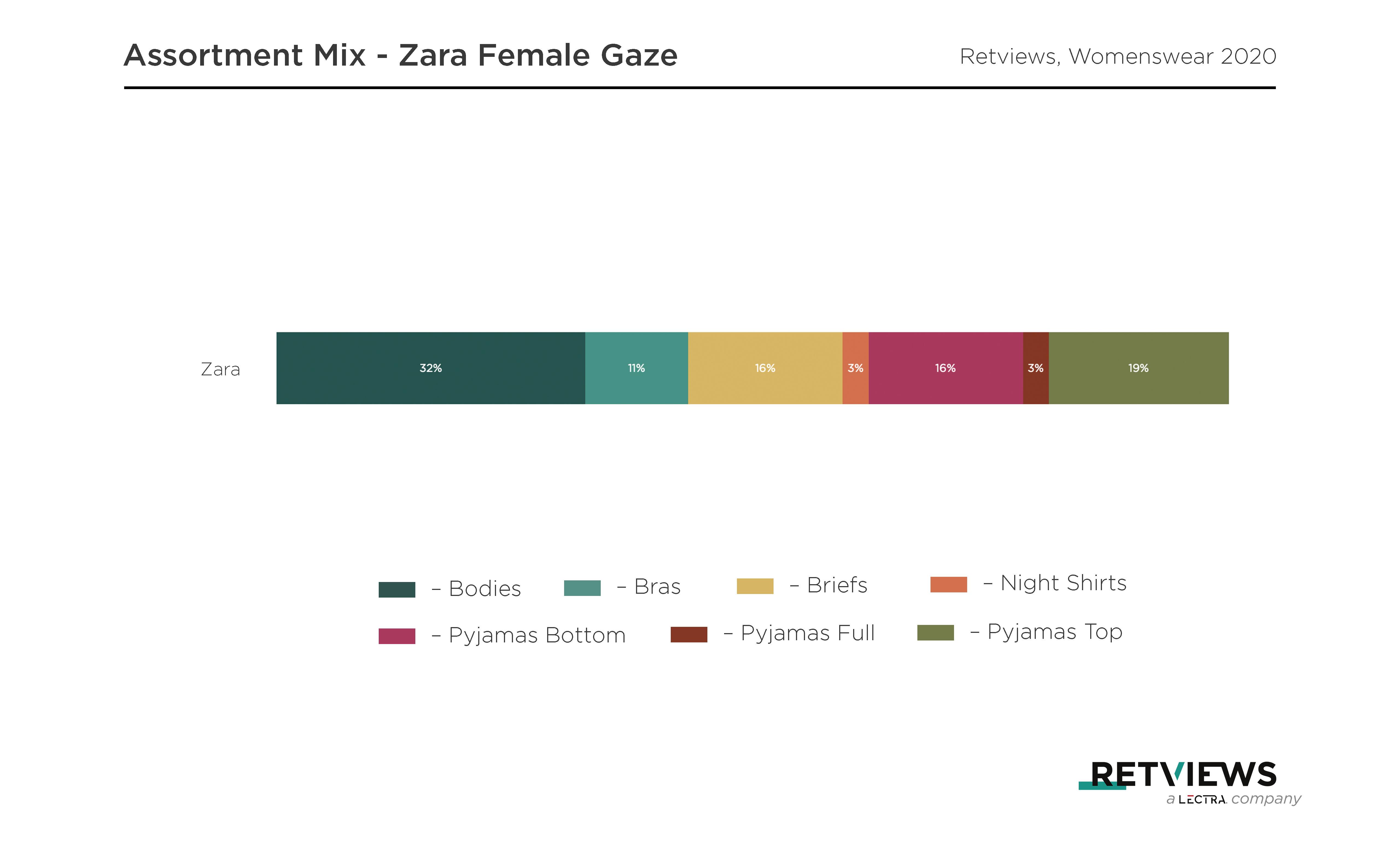 Timing is everything, and Zara knows it too well.

One of Inditex’s biggest strengths, especially Zara’s, is to get the right assortment at the right time. When the Spanish group launched Zara Lingerie, it made no exception.

October is not known to be the highest peak of selling for lingerie. Yet, Zara decided to launch its first-ever lingerie collection during that month.

Indeed, the number one retailer stood out by launching its collection exactly when nobody else was doing it. It was also the moment when the rumors of new lockdowns were spreading in the European countries. Instead of showcasing coats and knitwear, Zara decided to focus its efforts on lingerie.

When the first drop of the collection landed online and in-store, the articles were priced as premium brands. With mainly bodies and pajamas, the prices were close to Women’s Secret and Victoria’s Secret rather than Zara’s regular competitors.

After the first drop, Zara released more articles, especially briefs and bras. These products were priced at the same level as H&M, showing that the Spanish player is not afraid of its Swedish competitor. 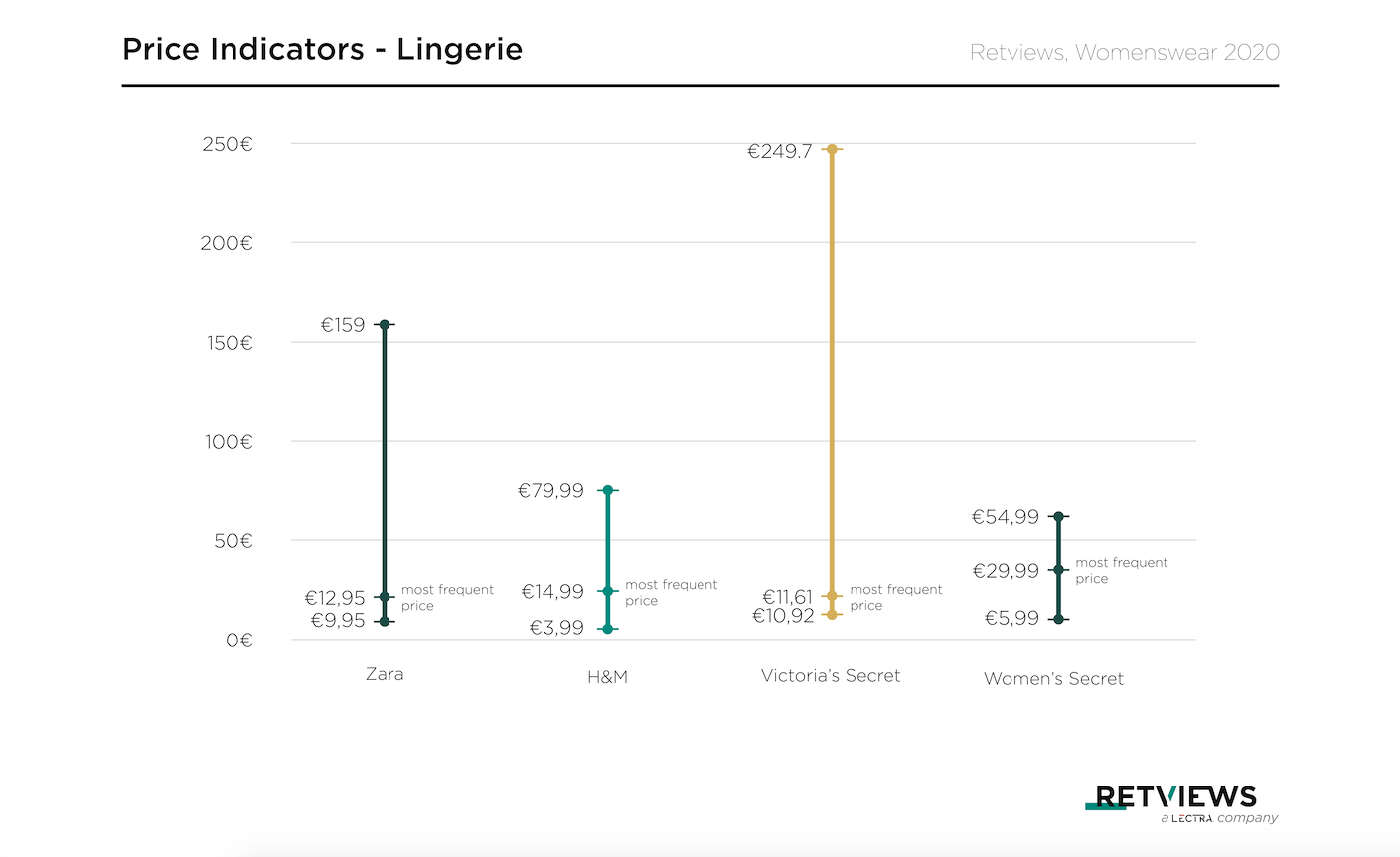 Moreover, from an entry price perspective, almost all retailers analyzed are lower than Zara. Nevertheless, in terms of the most frequent price, Zara is lower than its sister brand Oysho and H&M, making it a decisive advantage. A question arises: would this not cannibalize the selling between Oysho and Zara?

In general, the commonly used fabrics in fashion are cotton, nylon, and polyester. The lingerie segment is no exception. We especially see a high proportion of nylon as the fabric is more elastic, comfortable, and breathable. 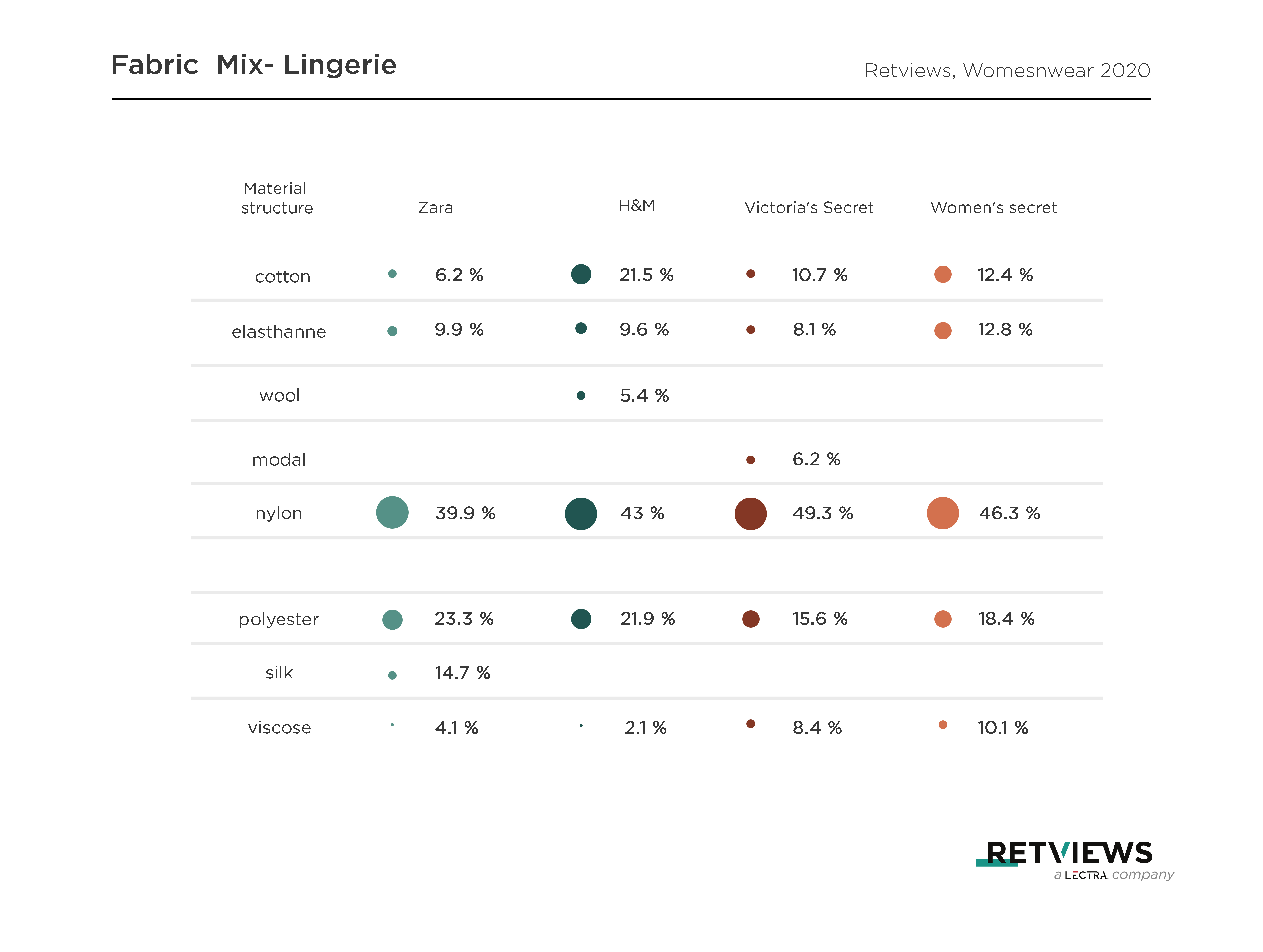 It is worth mentioning that Zara has the highest share of silk and way less cotton than its direct competitors. By doing so, the Spanish brand positions itself at the same level as premium lingerie brands but at a mass-market price.

For an extended period, Zara’s competitors could gain market share in the underwear category, as it was unexploited by the Spanish brand. That period is now over, and Zara has entered the lingerie segment by the front door.

On top of having highly competitive pricing and an assortment that customers want right now: seamless, sexy, and versatile, Zara displayed its strength for accurate timing once again.
Lingerie brands and fashion brands know they should never rest on what they have. There are always opportunities to seize. And Zara has done it well once again.