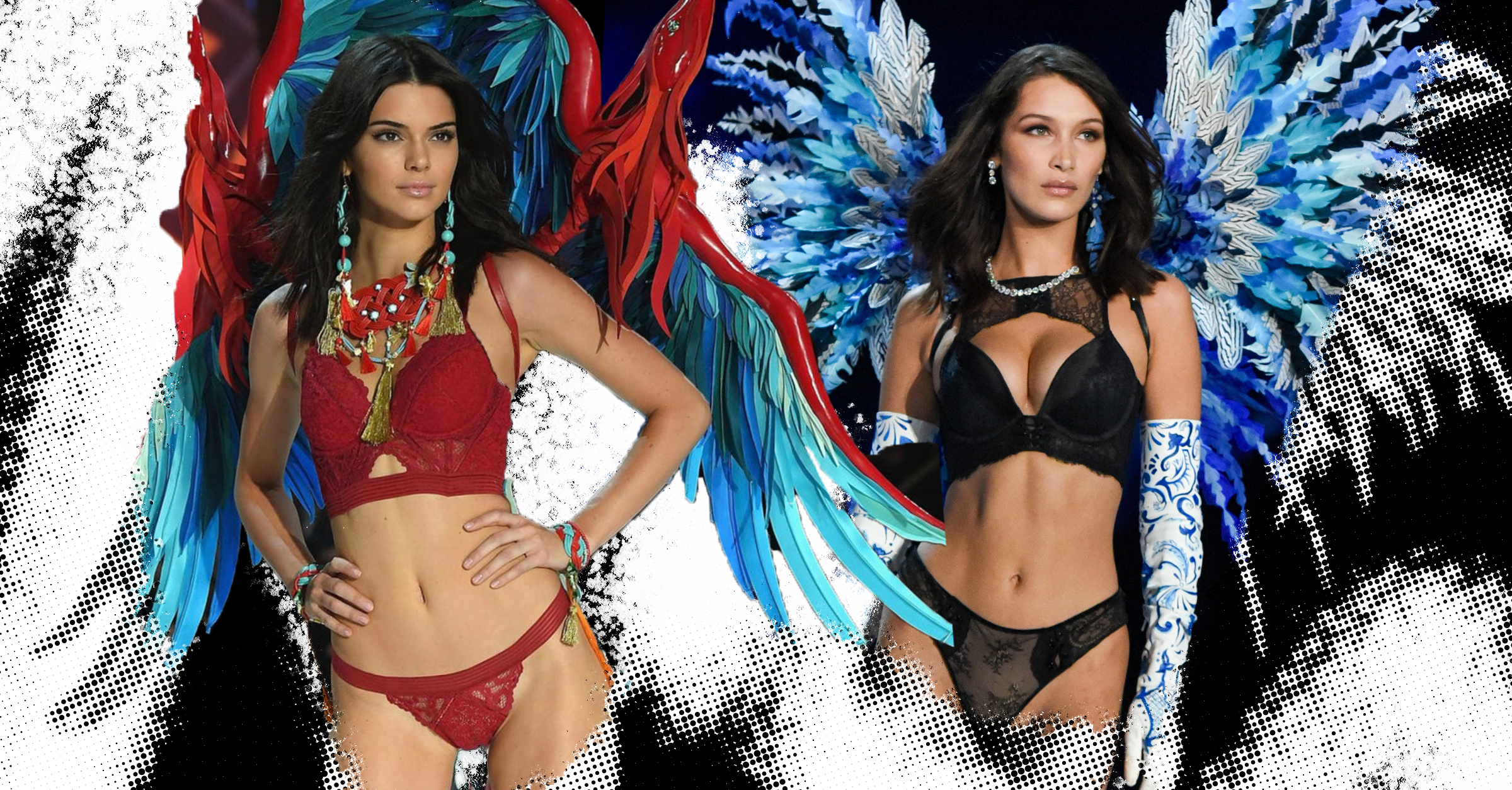 • While Victoria’s Secret Competitors embrace size inclusivity, the American brand has yet to follow the movement. Victoria’s Secret assortment still offers little XXS and XXL sizes compared to other lingerie brands like Aerie.

• 2019 was heavily reliant on discounts for Victoria’s Secret, and 2020 followed the same path.  Combined with an enormous level of articles compared to its competitors, there are opportunities to seize for the American Brand.

Angels. Visions of these ethereal, heavenly creatures are the first thing that comes to mind when you hear the words “Victoria’s Secret.” For years, the American brand made its name by creating a fantasy — the sexy image of fancy, fabulous outfits and otherworldly lingerie. The company’s annual fashion show was televised in prime time, featuring the famous wings worn by top supermodels from around the world.

The glamorous spectacle of those feather-festooned costumes from the heyday of the ’90s and 2000s is a thing of the past. Sagging sales have dogged Victoria’s Secret for years, and the brand saw losses in 2019. In the new era of modern lingerie, empowered women are looking for strength, comfort, and ease.  While  Victoria’s Secret image of sexy angels in lacy bras and tight-fitting undies doesn’t appeal to contemporary consumers.

In 2020, the American brand faced even more challenges: the Coronavirus pandemic led to widespread store closures, the bankruptcy of the UK branch — which was saved by Next PLC in late 2020 — and the termination of its previous deal with Sycamore. What will it take for Victoria’s Secret to regain the former splendor of its flamboyant, extravagant past?

In its 2019 annual report, Victoria’s Secret parent company L Brands reported a decrease in sales and then losses, which generated much-unsold inventory. The situation led to an expected drop in new arrivals for  2020. Retviews data shows this was indeed the case. In fact,  new arrivals decreased by 41% between 2019 and 2020. When viewed in conjunction with the Covid-19 pandemic, this should be good news for Victoria’s Secret, as they have a smaller inventory to grapple with. 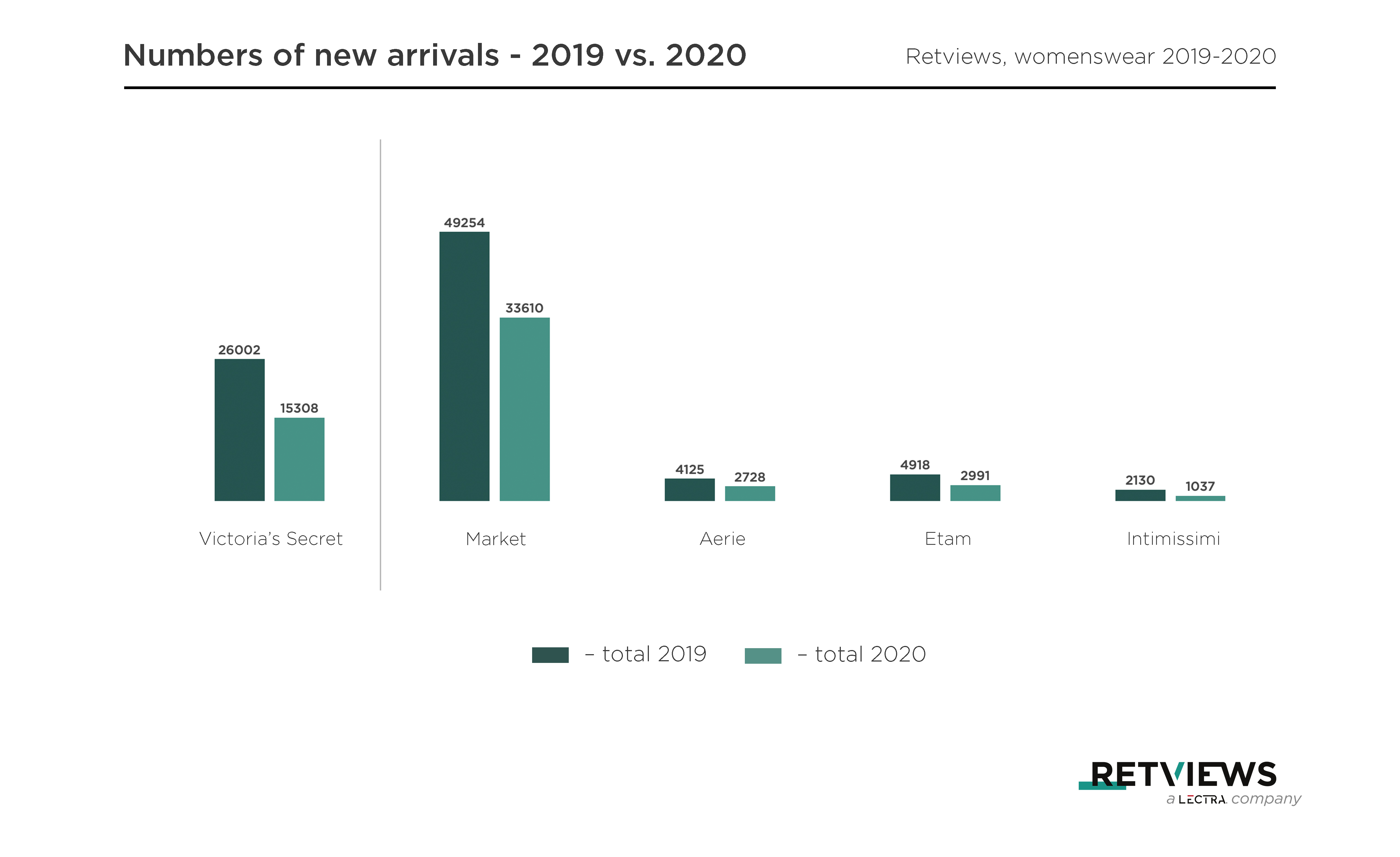 Still,  Victoria’s Secret competitors have way fewer articles compared to the American brand. Whether you look at long-established players in the lingerie game like Etam, or promising newcomers like Aerie, Victoria’s Secret has more than eight times the number of articles of its competitors.

Given the current state of the fashion industry, could there be an opportunity for Victoria’s Secret to curate its assortment further and focus its attention on giving consumers what they want — and what sells?

In terms of assortment, Victoria’s Secret carries significantly more activewear articles and underwear than its competitors. Because both intimates and activewear sectors are highly competitive. If there isn’t enough differentiation in terms of products and technology, consumers have few incentives to choose one brand’s wares over competitors’ offerings.

Are significant investments in activewear and underwear going to make a big difference for the American lingerie retailer? It might be Victoria’s biggest secret.

The Fit Factor: Is Size Inclusivity Relevant for Victoria’s Secret?

Diversity and inclusivity have gone from non-existent six years ago to table stakes today, according to ThirdLove CEO Heidi Zak. As other underwear brands are increasingly embracing the change, Victoria’s Secret has only recently recognized the need to change its marketing to include appeals to different-sized customers. This acknowledgment is a crucial shift for the company, which had previously not strayed far from the sexy push-up bra aesthetic of the 1990s. 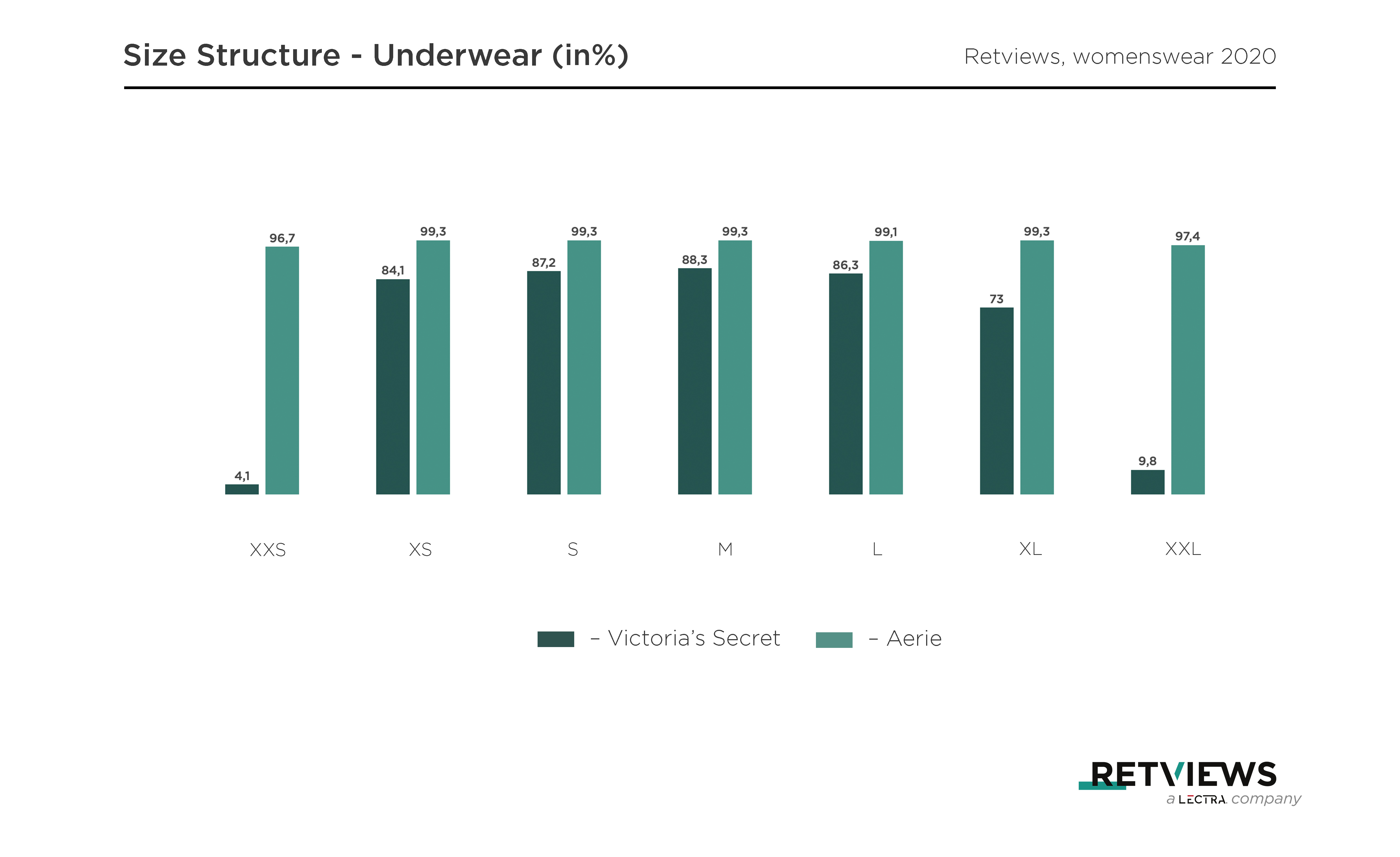 However, according to Retviews data, these planned changes have yet to be put into action. Compared with newcomer Aerie — a brand known for embracing all women through inclusivity and empowerment — Victoria’s Secret still doesn’t offer much choice in terms of sizing.

In 2020, L Brands’ 2019 financial report stated that Victoria’s Secret’s underperformance was due to reduced store traffic. Those factors resulted in promotions’ increase, negatively impacting its margins. 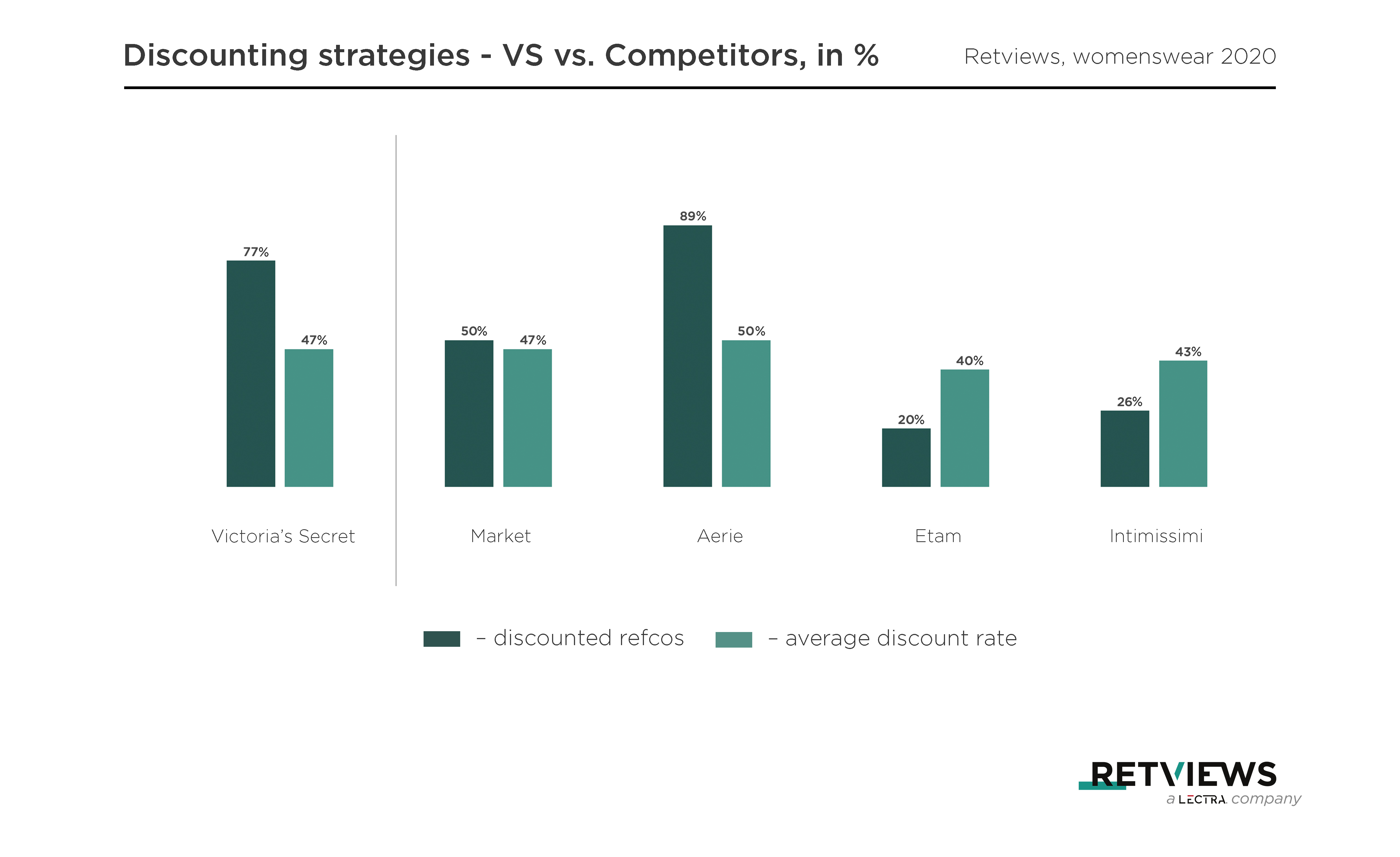 While we’re still waiting on the 2020 financials, the trend seems to be the same for Victoria’s Secret. While the competition discounted less than 30% of their assortments, the American lingerie brand discounted 77% of its assortment — at a higher average discount rate than competitors.

Many discounting combined with the large number of articles on offer at Victoria’s Secret might indicate that the company needs to reshape its assortment. On a side note, the high level of discounting is also visible in Aerie’s assortment — which is also an American-based brand. Is there a pattern of heavy markdowns in the American market?

Victoria’s Secret’s price communication leans toward the more glamorous and racy. With advertising featuring the famous diamond bra worn by Miranda Kerr, their branding is geared more toward sexy and seductive than comfortable and affordable. 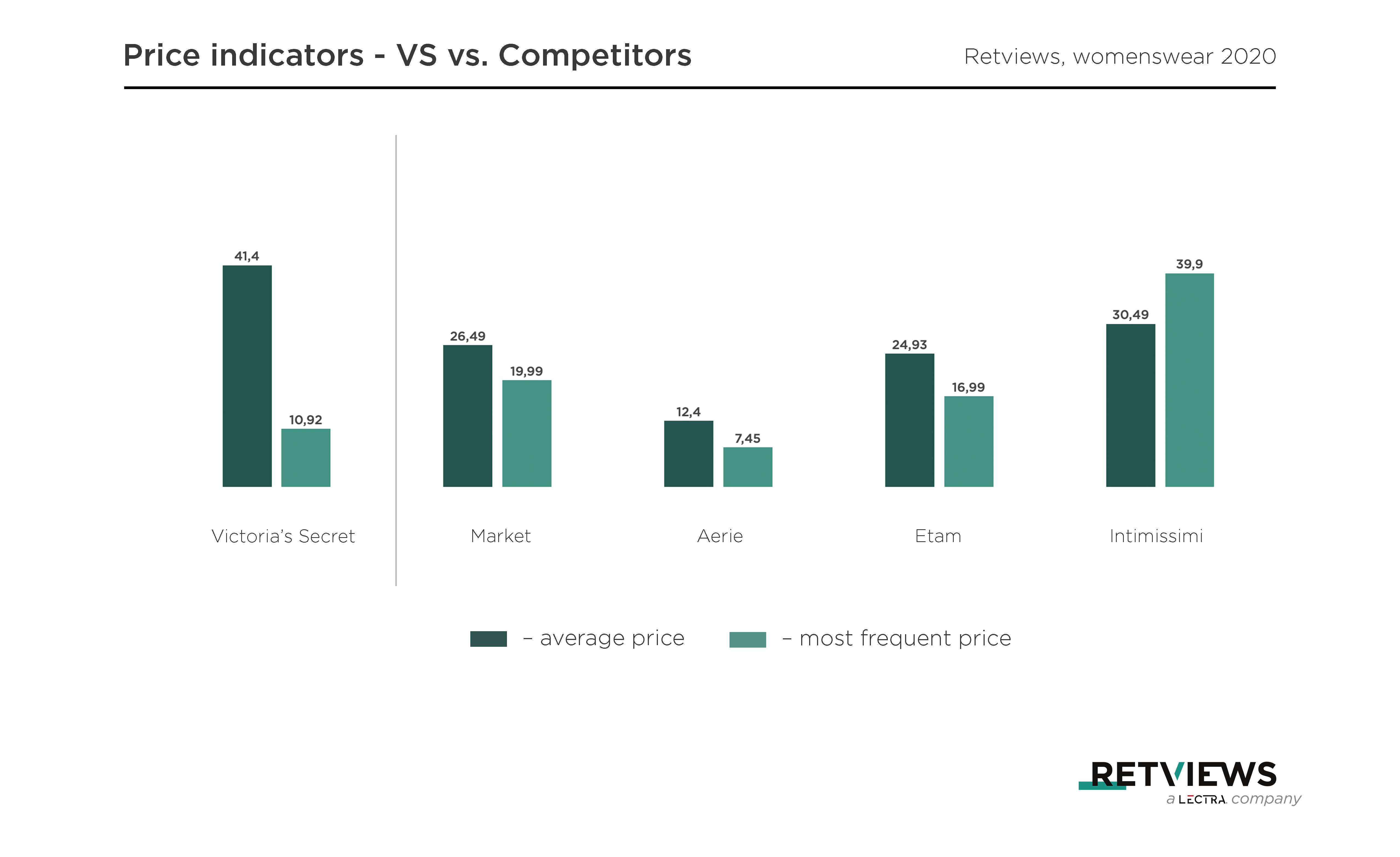 Nonetheless, the most frequent price of Victoria’s Secret is among the lowest. This message can be quite confusing for consumers, but it’s mainly due to the high number of underwear articles priced at around €10,95.

One question arises: if Victoria’s Secret aims to be a premium lingerie destination, shouldn’t its prices reflect this positioning?

Victoria’s Secret saw revenues continuously decline, and business deals fall through over the last year.  The future doesn’t seem so bright for the lingerie brand.

But the underwear giant is looking to change its marketing and become more aligned with what modern women are looking for. Combined with a readjustment in assortment to better fit consumer expectations, there’s a possibility for Victoria’s Secret to reclaim its position as the go-to for bras and underwear.

Although the brand might be losing relevance, no viable successors have yet emerged. How long will Victoria’s Secret stay undefeated? If the brand manages to recalibrate its offerings, they have the chance to reign supreme once again.