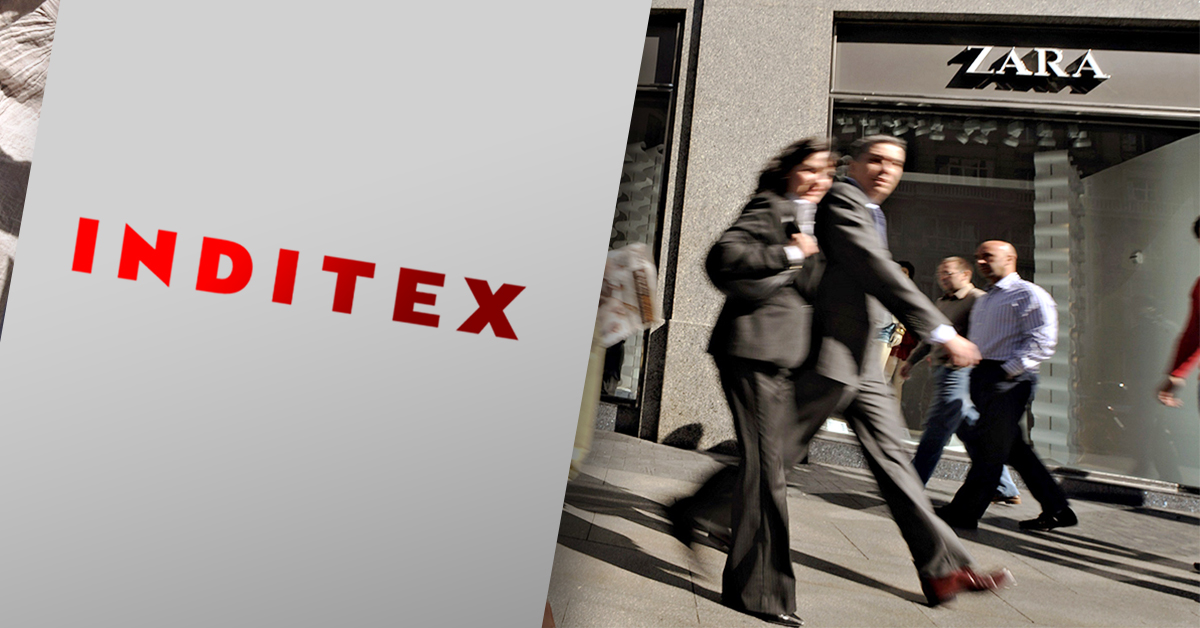 WHO IS INDITEX FASHION GROUP?

Inditex is one of the largest fashion retailers in the world today, owning the most beloved brands of all fashionistas. The global leader has managed to earn its place by adapting its strategy to the ever-changing shopping habits of its customers. By owning its supply chain, the Spanish giant has gained greater flexibility always to deliver the latest trends, embodying the idea of “fast fashion”.

But what else makes Zara’s owner so unique? It can serve each segment of the market and create the right appeal for each customer group. A multi-brand strategy that allows the world’s biggest fashion retailer to target everyone. Even during this period of uncertainty, Inditex managed to stay profitable despite the coronavirus blow, reporting a full-year profit at €3.64bn, which means a year-to-year growth of 6%. Analysts expected the Spanish Group to have a 12% year-to-year growth, but decisions have been taken by the group to write off €300million of inventory to help to cope with the pandemic and to reduce its impact on the stocks.

Amancio Ortega, the owner of the Inditex group, has created an empire based on eight large brands. The specificity of the brand is that each of them has its positioning strategy and caters to different cultures and age groups.⠀

⠀CATEGORY MIX: DOES IT REVEAL THE TARGETING STRATEGY OF THE INDITEX BRANDS?

Since 1974, the year Zara was founded, the brand has been able to keep up with rapidly changing trends. The brand style is trendy and urban, at relatively low prices. The offering is broad and targets not only women and men aged 20 to 45 but also children.

Bershka, on the other hand, is all about seducing cool and stylish teenagers, to whom collabs hold high importance. The second-largest revenue contributor of Inditex, i.e. Bershka, aims to inspire its younger audience. Therefore, it requires a distinct product mix. The targeted customer of each brand becomes apparent when we take a look at the product mix below. 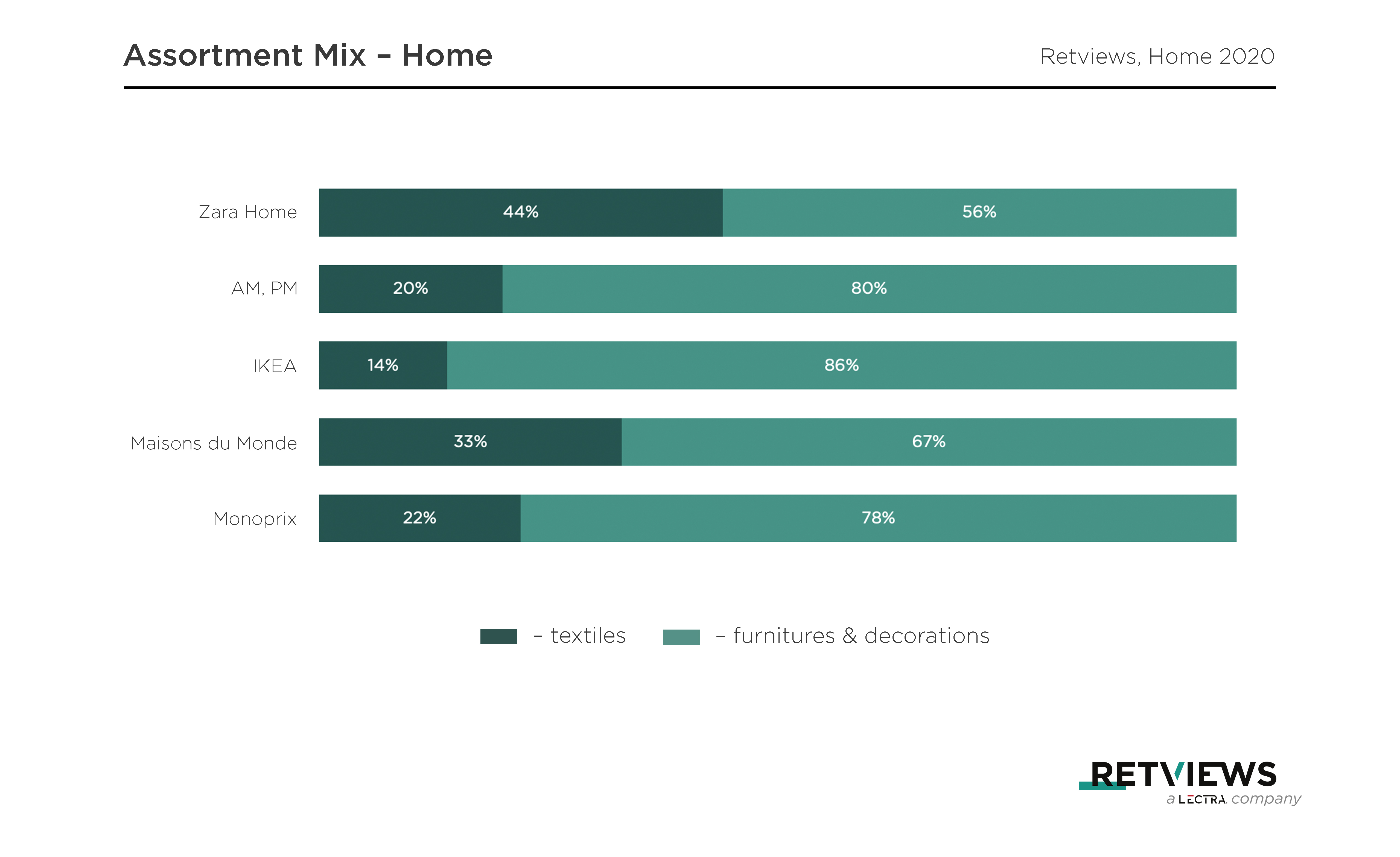 At Zara, two categories are highly represented: Shirts&Blouses and Dresses. Together, they account for almost 30% of the collection. These products sell better with adult women rather than teenagers. Shoes are also well represented, with 6.9% of the assortment mix. Sweaters and T-shirts which usually target youngsters have a lesser share of the assortment mix at Zara.

On the other hand, Bershka t-shirt category holds a much higher share of assortment. It is considered a youngster category and, therefore represents 19% of the assortment, which is almost double to Zara’s at 10%.

Also, Collabs are trendy right now and appeal more to younger target groups. It can be seen in the share of collabs for Bershka, which is almost three times higher than Zara‘s. 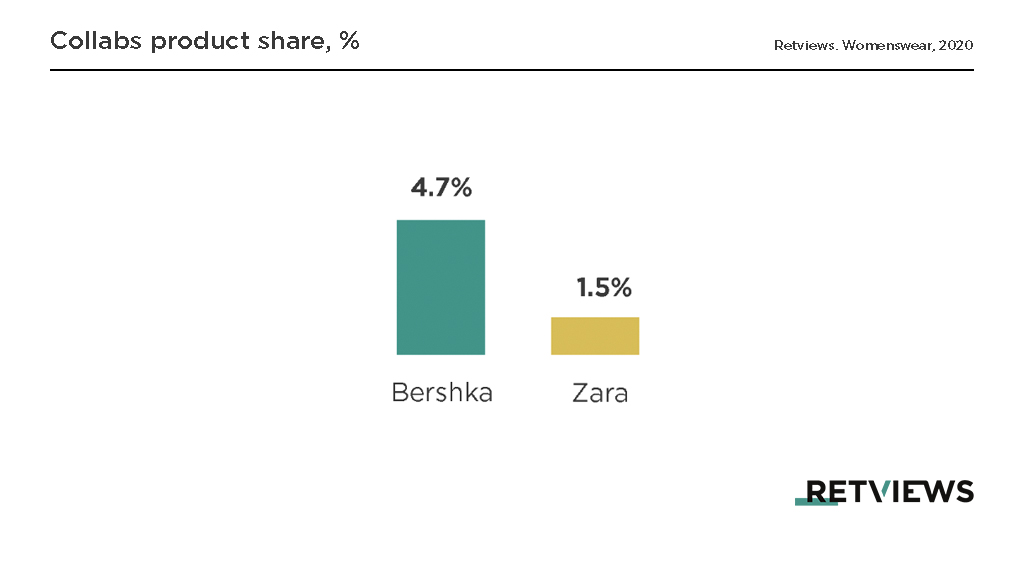 Wondering about the assortment mix of all Inditex group’s brands: download the full pdf report here.

Historically, menswear has always accounted for a smaller share of business compared to ladies-wear. However, recently the trend is changing; menswear has been growing and outpacing its opposite gender.⠀

At Inditex Group, four brands offer menswear. The gender offering is still dominated by women’s clothing as is the case with the whole fashion market, but menswear has been slowly picking up the pace. Pull&Bear shows the most gender equality as more than 40% of its products are menswear. Massimo Dutti initially founded in 1985 as a menswear store now excels in its women segment. 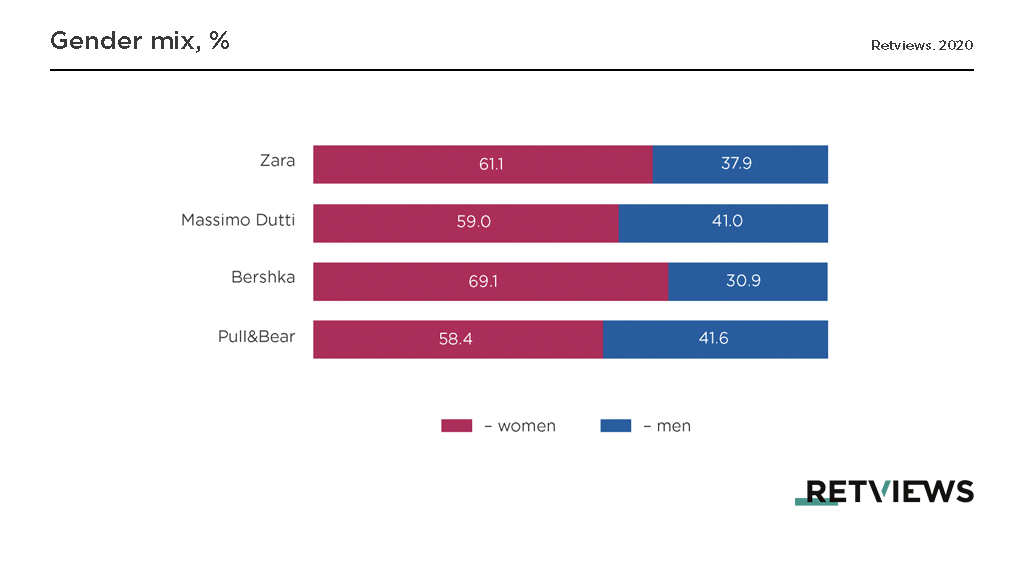 PRICE POSITIONING: WHERE DOES ZARA STAND COMPARED WITH ITS SISTER BRANDS?

A brand’s price positioning depends on its target audience and how it is perceived by it. For instance, Massimo Dutti, elegant and classy brand, is perceived as a more high end and almost premium brand compared to its sister Pull&Bear. Therefore, this distinction between brands’ price positioning can be better observed through their average price. You can see that these brands have a distinct price positioning; each tailored to a specific consumer group. 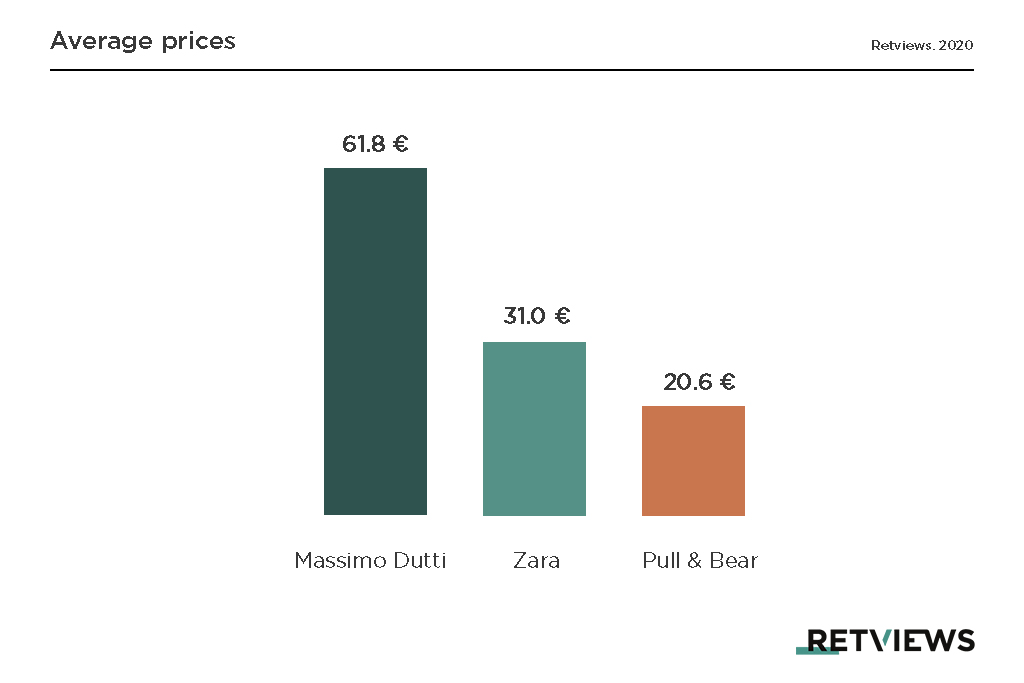 The main money-maker of the Spanish Group has a  well-spread price diversity. It offers products at every price bracket thanks to its broad offer and a wide variety of fabrics. Zara is not only one of the most beloved brand due to its ability to offer the latest fashion products to its customer but also providing them at affordable prices. Almost two-thirds of Zara‘s products fall between the price range of 10 to 29.99 euros which is similar to its younger sister brand, Bershka. 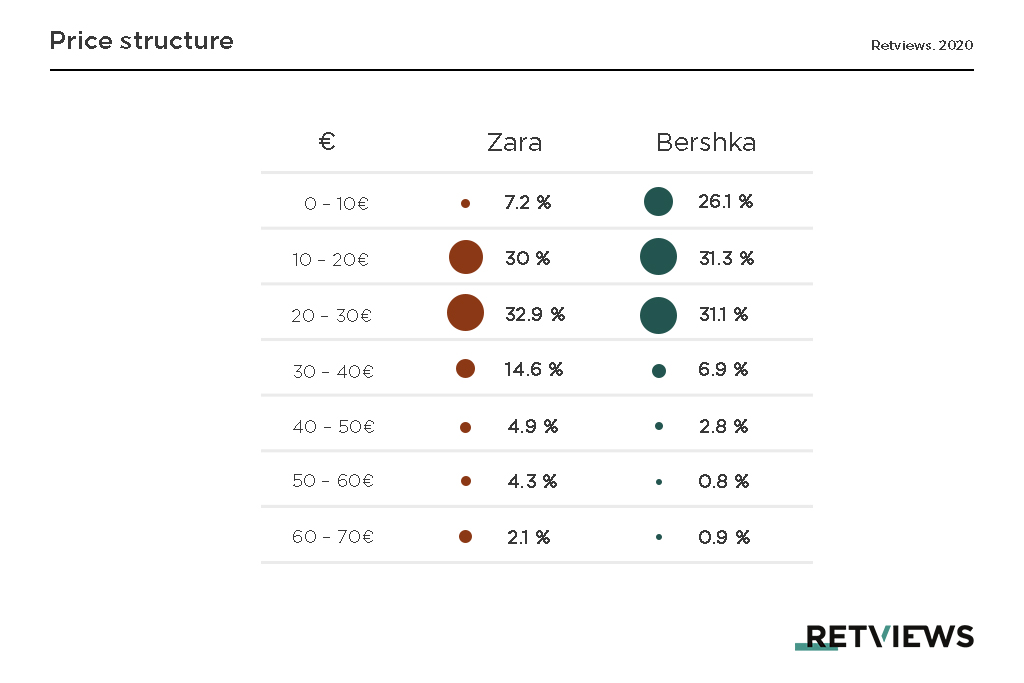 IS ZARA CHEAPER IN SPAIN COMPARED WITH OTHER COUNTRIES?

Every fashionista has, at least once, wondered if the prices of its favourite fashion brand were the same everywhere. When it comes to Inditex‘s number one brand, Zara, the answer is no. You can see that the average price in Spain is almost 18 per cent lower compared to the other European markets (28.6 euros in Spain as compared to 33.7 euros in other markets). It is worth definitely going to Spain for a big shopping spree.

This lower average price in Spain can be explained by the cost of living as compared to other countries. For instance, Spain and Portugal have lower purchasing power as compared to France and Italy. According to the OECD, the average household net adjusted disposable income per capita in Spain is $23.999 a year, less than the OECD average of $33.604 a year. It might, therefore, explain the difference in the average price of the Spanish market. 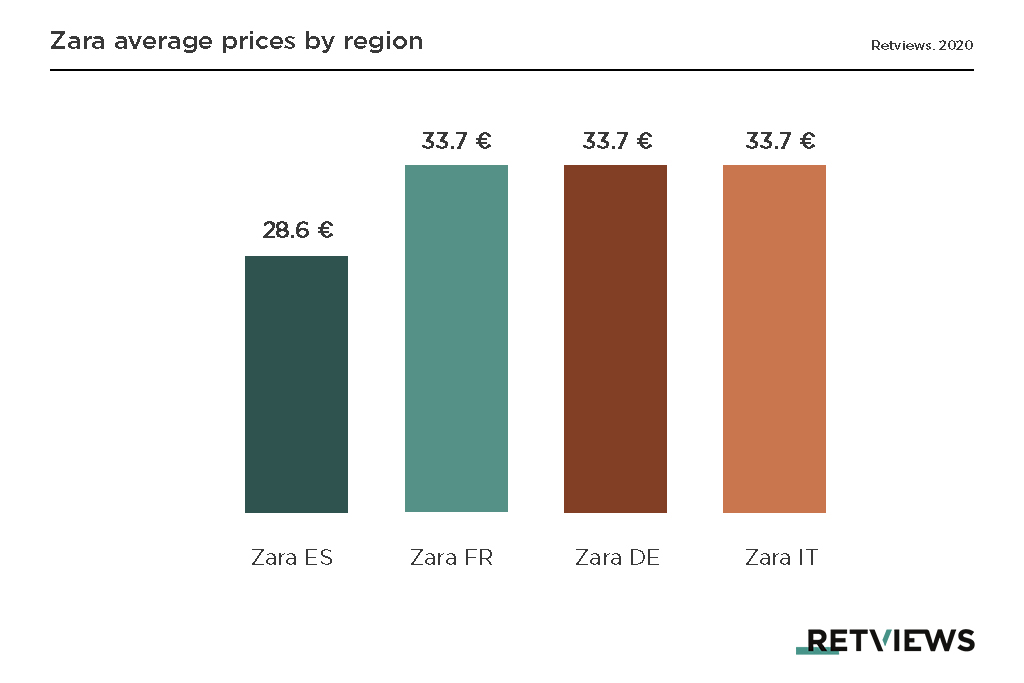 TIME-TO-MARKET: THE SECRET OF ZARA’S SUCCESS

Zara’s most undeniable biggest strength is its capacity to get the right trend at the right moment, which is a dream of all merchandisers. This capacity to set the tone in the rapidly changing industry makes Zara the biggest competitor to many brands.  In terms of new products released on the market, let’s compare Zara to its rival H&M. It’s apparent that the Spanish champion is always one step ahead of the curve. 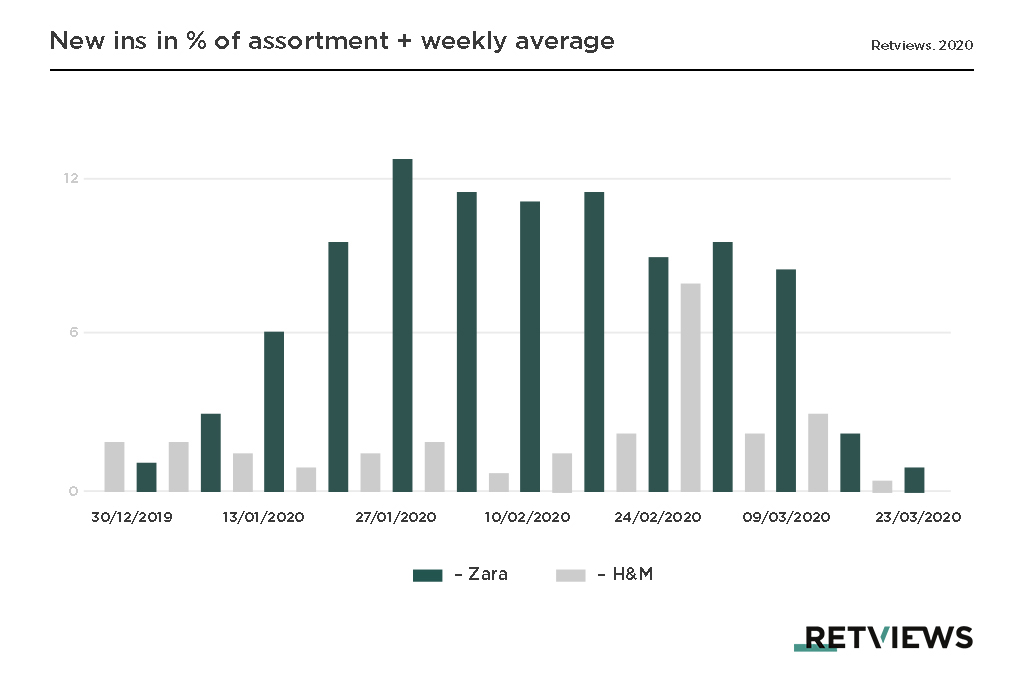 This strength can also be observed for the other brands of the group. Indeed, Bershka and Pull&Bear follow the same pattern as Zara.

SPORTSWEAR: WHICH BRAND HAS THE ASSORTMENT WITHIN THE INDITEX GROUP?

Sportswear, as well as athleisure style, has seen rise through time with the wellness and fitness lifestyle trend. With the current state of fashion, home workout searches have increased many folds. There is only one brand of Inditex offering a sportswear assortment to its customers, i.e. Oysho. ⠀

Oysho, created in 2001, has the particularity that it is the only one of the group’s brand to represent the lingerie industry. Its nightwear category makes up almost one-third of its assortment mix. Among its competitors, only Etam, Intimissimi and Victoria’s Secret have a broader assortment in nightwear.

WHAT MAKES INDITEX THE NUMBER ONE RETAILER IN THE WORLD?

Zara’s owner has been creating fashionable garments for years. Throughout its history, the group has managed to stay competitive and also achieved global fame.

What makes the group successful is the perfect differentiation it has created between each of its brands, allowing them to have their DNA. The success has not been achieved through the assortment mix and pricing strategy alone but also the gender mix as well.

Also, Inditex is a group known for always staying on top of the trends. The company is right on time for the latest trends and is exceptionally agile, following the cities’ fashion weeks closely and delivering precisely what each customer group wants.