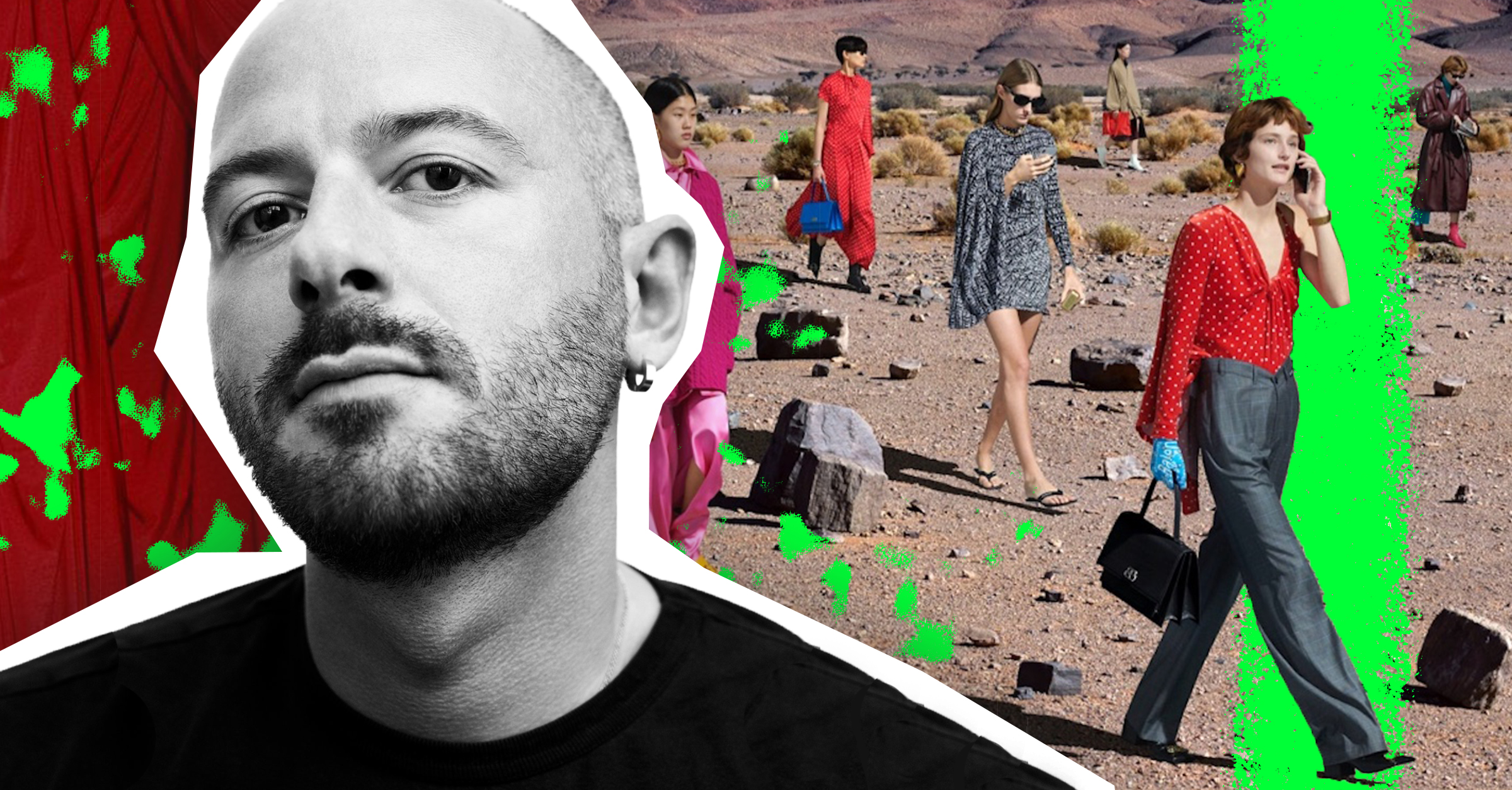 • Balenciaga’s assortment shows that the “less is more” ethos is in full effect for the fashion house. The French brand carries three times fewer articles than its competitors.

• Footwear holds higher importance for Balenciaga than for its peers. The fashion house allocates 18% of its assortment to shoes, representing a more than 30% share of business for the fashion house.

• Balenciaga is in the vanguard of luxury-sneaker makers. Even today, the fashion house has three times more articles in sneakers than its competitors do.

Owned by the French conglomerate Kering, Balenciaga generated around €1 bn last year and earned a place on the list of hottest brands in the world.

The brand’s approach to marketing to a younger generation starts with creative director Demna Gvasalia who injects sportswear aesthetic to the brand and its marketing. Gvasalia, along with David Tourniaire-Beauciel, developed the now-famous Triple S Shoe, which made them top players in the luxury sneaker movement.

Balenciaga understands how to speak to a Gen-Z audience — and how to stand out from the crowd. At the beginning of December, the fashion house showcased their latest collection through the video game Afterworld: The Age of Tomorrow.

What is the French fashion house’s secret to streetwear success? How did Georgian designer Gvasalia manage to revamp Balenciaga’s image, giving it the youthful,  coveted vibe that the house is known for today?

For more than 80 years, Balenciaga has redefined fashion codes again and again. Since its beginnings in 1937, Cristóbal Balenciaga has taken a rebellious approach to design. His art was in opposition to the then-popular curvaceous, hourglass shapes promoted by contemporaries like Christian Dior. Clean, flowing lines and simplified silhouettes are elements that define Balenciaga to this day.

Cristóbal, who did not like the ready-to-wear turning point fashion was taking,  retired from the fashion industry in 1968. It might be one of the reasons why, even today, Balenciaga has fewer articles than its competitors. 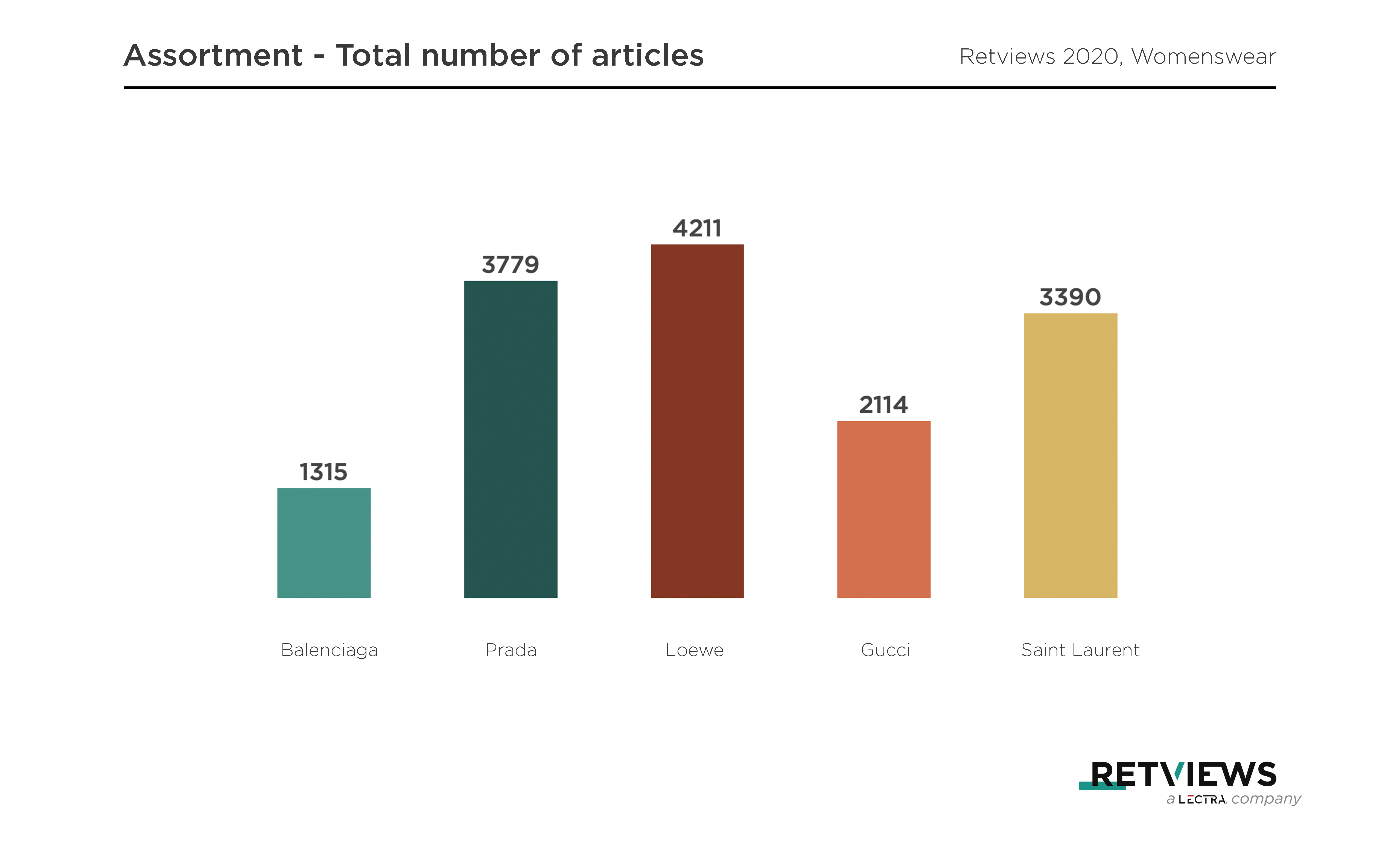 In 2001, Kering acquired the fashion house, and highly talented designers have succeeded Cristóbal Balenciaga — including Nicolas Ghesquière, Alexander Wang, and, in 2015, Demna Gvasalia.

Once an underground designer, Gvasalia managed to breathe new life into Balenciaga and contributed to its current success. The Georgian designer infused his streetwear sensibilities into the simple, straightforward cuts of Balenciaga’s designs.

The Importance of Shoes for Balenciaga retail strategy.

As described in the Retviews Luxury report, accessories and shoes are the first luxury gateways. They are also the most straightforward status symbols and are the articles with the best per-square-meter ratio of revenue generated.

So it comes as no surprise that Balenciaga, like its competitors, has a dominating share of accessories (including bags). However, what differentiates the French fashion house from its competitors is its high share of shoes compared with other high-end brands. In the graph below, we observe that Balenciaga dedicates almost 18% of its assortment to the footwear category, compared with only 10,2% at Prada. 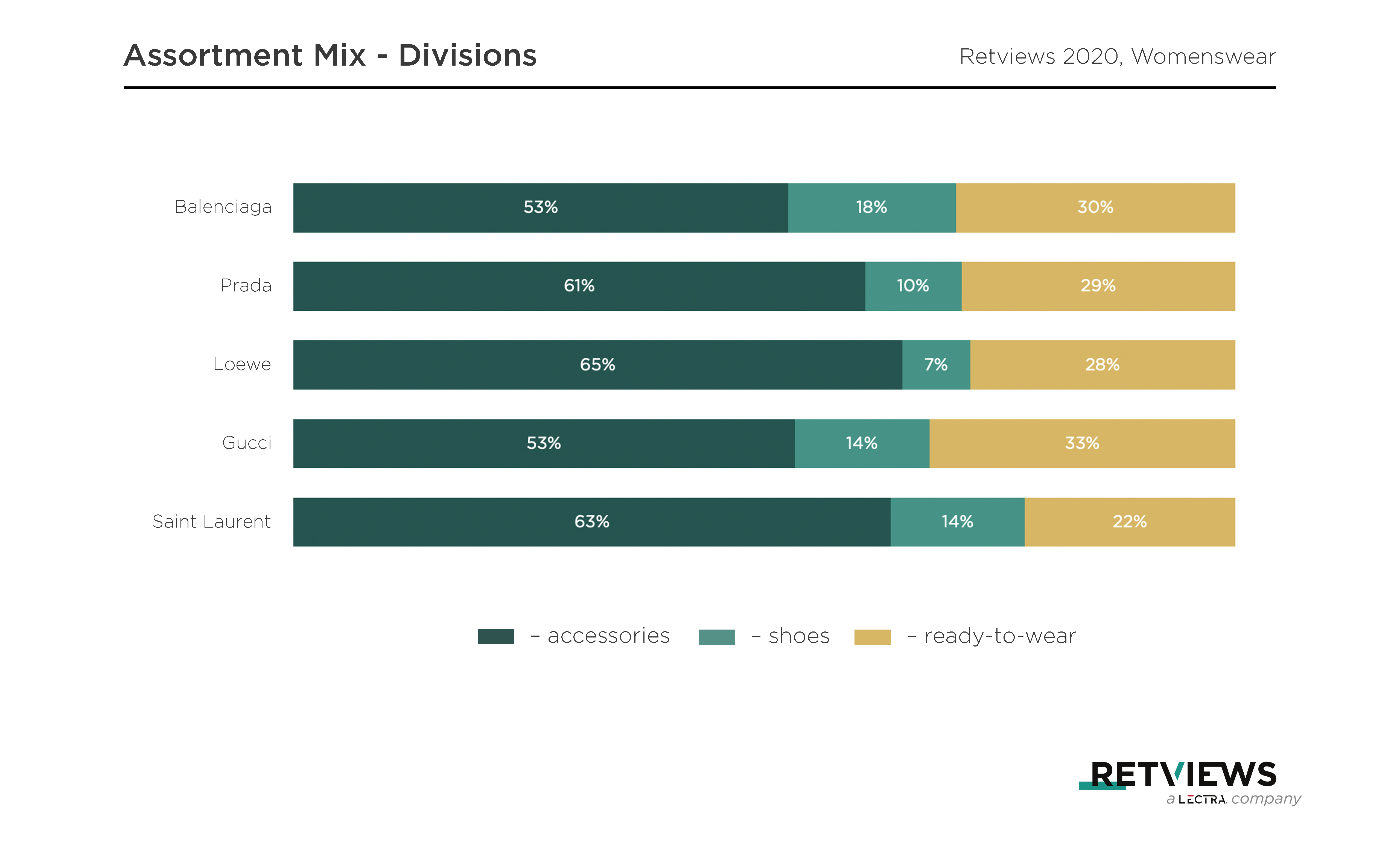 One of the reasons behind this choice is the revenue the footwear category brings to Balenciaga. According to Kering 2019 report, shoes represent around 31% of the business share for Balenciaga. In an industry where curating collections and reducing SKUs to avoid overstock has become essential, more than ever, Balenciaga shows that it knows what to do: focus on what sells — shoes!

The arrival of Demna Gvasalia at Balenciaga was a decisive turning point for the fashion house. The designer infused his sportswear aesthetic while staying true to the brand’s DNA: fluidity and simplicity.

“The Balenciaga Triple S is the shoe to be thanked — or blamed, depending on who you ask — for this dramatic U-turn in footwear fashion. It’s an elegantly absurd piece of design that had fashion editors scribbling in notepads and high-street shops churning out copycats the second it stomped onto the runway in January 2017.”  — Fashion Beans

Balenciaga’s designer mentioned in an interview that what interests him is “the modernity, comfort, functionality and technicality” that one can find in sportswear. And the creative decision paid off. The signature sneaker, Triple S, made with David Tourniaire-Beauciel, became an instant success. 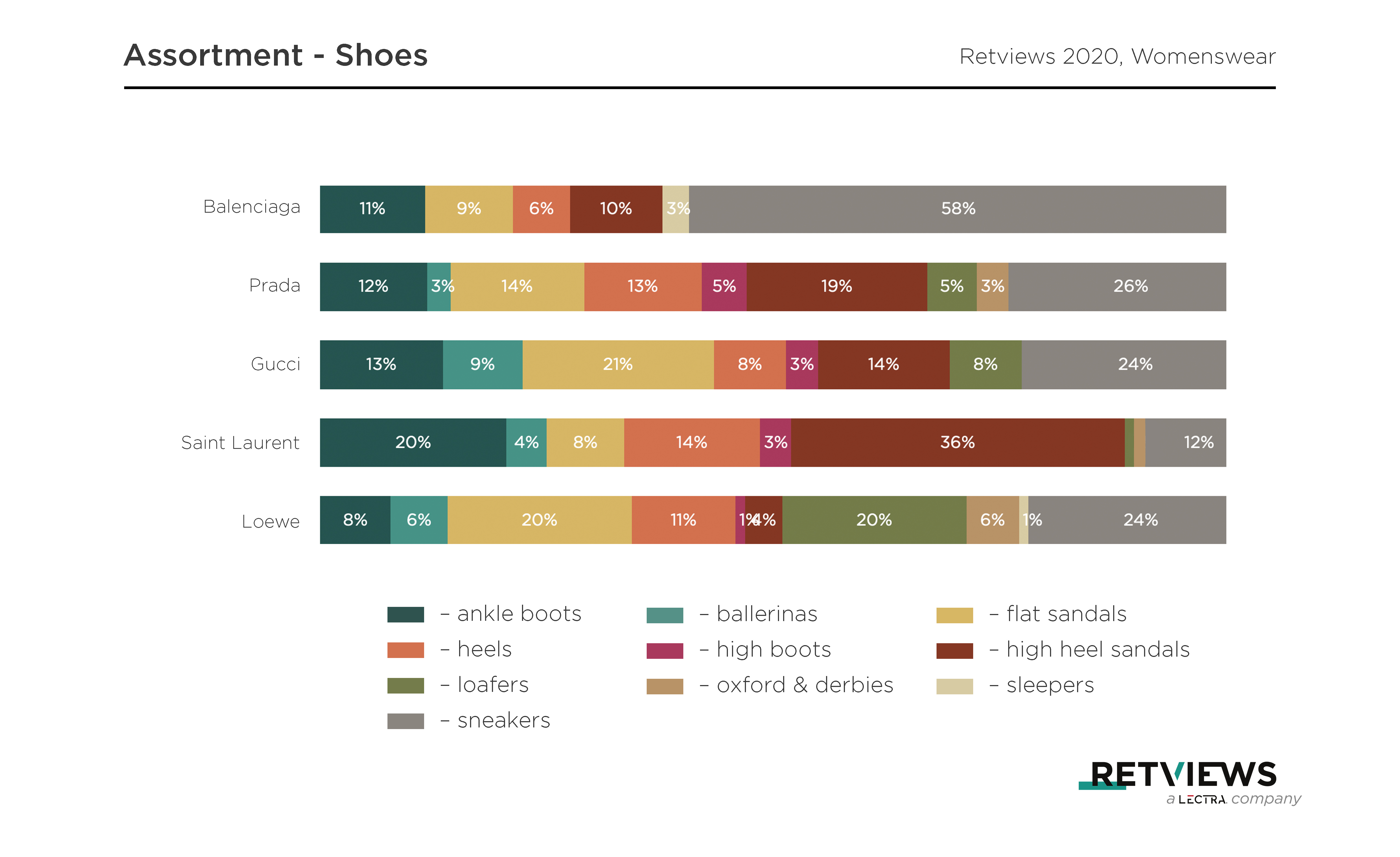 According to Retviews data, we see that Balenciaga does not diversify much of its footwear offerings compared with its competitors. Nor does the brand produce many articles. We see that the fashion house focuses mainly on what it is selling best: its sneakers.

Moreover, compared to its competitors, Balenciaga has not only almost three times more articles dedicated to sneakers only but nearly two times more styles. It shows how serious the fashion house is about streetwear, and why Balenciaga is a trend-setter and luxury-sneaker leader.

When it Comes to Luxury, Prices Don’t Matter

The luxury industry is known for being a decidedly price-insensitive segment. Balenciaga understands this well. It’s not the most affordable luxury house, nor the most expensive one. The French house has a most frequent price of €695, compared with more than €850 for Prada, Gucci, and Yves Saint Laurent.

According to Bain, Gen-Z should represent almost 40% of the global market for personal luxury goods by 2035. This might explain Balenciaga’s price strategy. With a mid-price range and the most frequent price in the lower spectrum, the fashion brand can reach a younger demographic with lower incomes.

With a turnover beating the €1 bn mark last year, Balenciaga proves that price does not matter to its clientele. Aesthetic and a brand identity that resonates with its target customers is what truly matters.

Balenciaga demonstrates its strength by targeting the right customers in this new era of streetwear fashion. On top of that, the fashion house already accepted the challenge of targeting Gen-Z with its young, edgy marketing and out-of-the-box approach to fashion.

Balenciaga’s strength is knowing to focus on what works best for the brand and working on developing that segment. As McKinsey and Business of Fashion described in the latest State of Fashion, “less is more” should become the motto of many brands. It is already the case for Balenciaga.

Still far from the €9 bn Gucci figure, but getting closer to the €2 bn number at Yves Saint-Laurent, Balenciaga is enjoying continuous growth, and will one day reach the level of its Kering peers. Among the top five hottest brands, according to The Lyst Index, Balenciaga has a bright future.